I was challenged a while ago to see if I could make a dodecahedron out of rick racks. After a bit of experimenting I ended up with this, a Contemporary Geometric Beadwork rick rack dodecahedron! 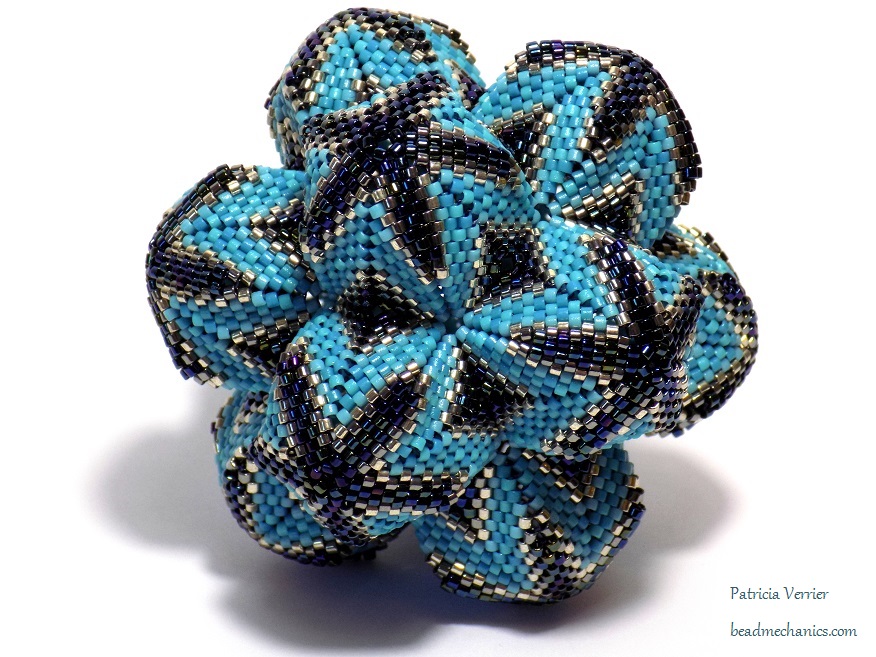 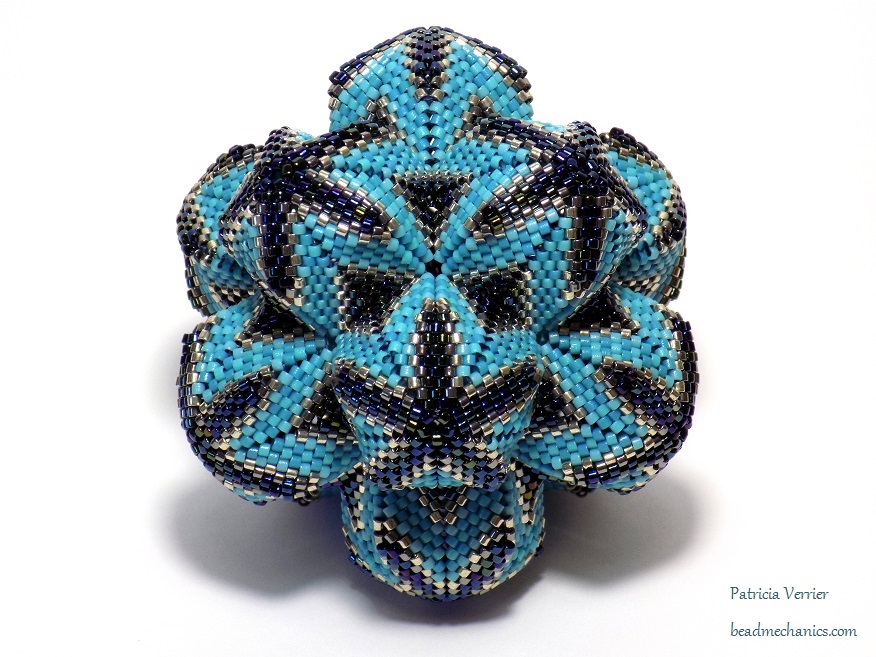 This piece actually started out life in pink and yellow. I made a few test pieces first to see if the idea would work with the closest beads to hand. I originally thought it would work with the rick racks the other way up, but quickly found out that I’d made a mistake in working out the angles and that didn’t work! But that mistake is why I zipped the tops of the rick racks together – initially I’d thought they might slightly collide with their neighbours unless their sides curved inwards. Although I was completely wrong on how I’d imagined them fitting together I liked the shape of the closed rick rack, so kept working with it. Once I had a structure I was fairly sure was going to work I then spent far too much time deciding on the final blue colour scheme. (Picking colours is far harder than working out the geometry!)

I made each rick rack by casting them from a CGB Pod-Cast bead. The pod makes these small rick racks so much easier. I’m not good at starting a rick rack from scratch as I can never get the tension quite right, and the MRAW band method would add a lot of overhead for such small pieces. I would never have attempted this shape before! Here’s the finished dodecahedron with the Pod-Cast bead used to create it:

Despite having spent ages picking them out I was still a bit worried about the colours to start with, but now it’s finished I really love it – I’ve already started a second variation!

Since the whole shape is based on CGB techniques, and a big part of the CGB project is sharing ideas, I thought it would be good to give some instructions here on how to make it. So, here is a brief tutorial!

This tutorial is also available as a pdf!

It is a bit tricky in parts as the curves make it hard to stitch through some of the beads, but a curved beading needle will help a lot with this.

If you haven’t made a CGB rick rack before you can find instructions on the CGB website (and in CGB vol. 1 and vol. 2 too)! The rick racks here are built from a five-sided Pod-Cast, with at least 5 beads on each side. My pod has 7 beads per side, but that doesn’t matter, I can just use 5 beads per side and skip the last two: 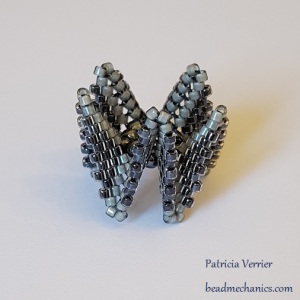 Instructions on how to make a Pod-Cast and cast a rick rack from it are available on the CGB website – both as a written pattern and a tutorial video.

The rick rack pattern I used is fairly simple, with five beads on each side of the rick rack, as shown in the diagram below. (Note that it’s a continuous band worked in the round, not flat, it’s just easier to draw it this way!) Each row is just a different colour, in the following order: D, F, E, F, D, B, C, A.

Tack the first row onto the pod using a short piece of thread (in a different colour if you have one) and extra size 8 seed beads at the decreases so you can remove the rick rack later. Then start the second row with a new piece of the navy blue thread, about 5′ long. Leave about a 10″ tail so you can reinforce the first row later. Continue with this blue thread until the rick rack is complete:

Remove the rick rack from the pod by cutting between the size 8 seed beads on the first row. Once that’s done weave in the tail thread around the first row to reinforce it, but leave the working thread at the top:

Weave the working thread around to exit a bead in the middle of the increase at top of one of the peaks (as in the above photo). Add a point bead and then add 4 more peyote stitches with the blue iris (A) beads: 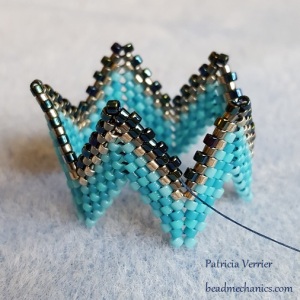 Then zip these beads to the next peak like this: 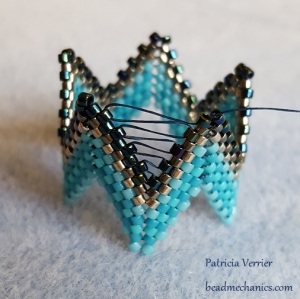 Pull the thread tight so the sides join together, and then reinforce the join by doing a square stitch around the two beads at the top of the join:

Continue around zipping up the other sides in the same way, and then do a loop around the point beads to hold the centre together:

Reinforce this loop a few times, then weave in the thread. That’s it, the rick rack is complete!

You need 12 of these in total for the complete dodecahedron.

The pattern for the warped squares is also fairly simple, as shown below. It’s just two rows of A followed by one of C and one of B. 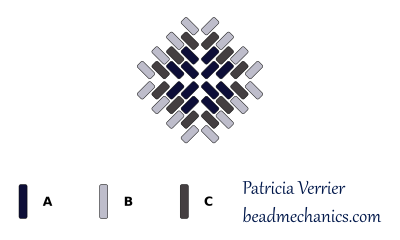 Use about 18″ of thread, and leave about a 5″ tail. At the end of row 4 leave the working thread but weave in the tail thread around the first 3 rows to reinforce them.

Weave the working thread around the last row until it’s exiting from the first bead after a valley, as shown above.

Joining the Pieces Together

Two sides of each warped square will be zipped to one “side” (or peak) of each rick rack using the beads shown in the photo:

So, to join the first two rick racks together, start by zipping a warped square to one of them as shown below. Note that you need to skip the first bead on the first side of the rick, as marked below in red (you’ll pass through this bead at the end). 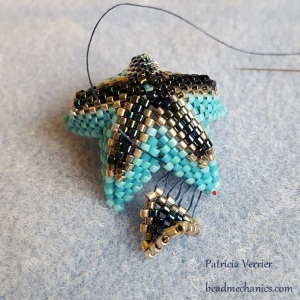 Continue zipping down the other side of the square: 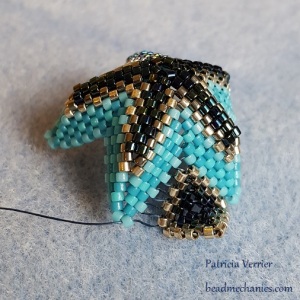 When joined it should look like this, with the working thread exiting from the last bead on the rick rack: 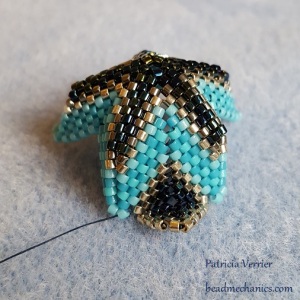 Now zip the square to the other rick rack, making sure that on this rick rack you do pass through the first bead (as shown in red): 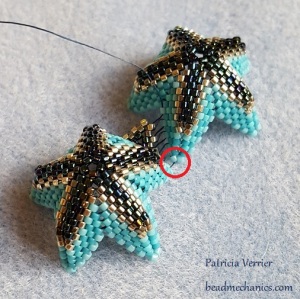 Once you’ve joined the warped square to the second rick rack continue back around to the first side to stitch through that bead skipped at the start (note that the beadwork is now the other way around to the last photo!):

The curved beading needle will help here, as the angle can make it quite difficult to stitch this last part of the join.

(If you find this last part of the join difficult you could try starting the join further along the warped square instead, so the last bead in the join is higher up on the rick rack. Another alternative might be to not fully complete the rick racks before joining them – leave them open and zip the tops together afterwards. However I haven’t tried this so I’m not sure how well it would work!)

End the thread by weaving around the sides of the first rick rack to secure it. The first join is complete! 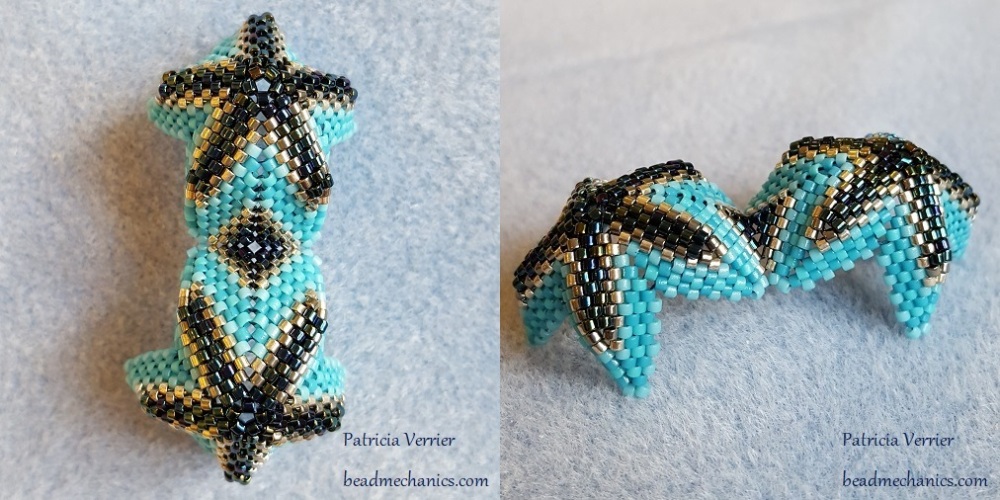 Unfortunately I didn’t take many in-progress photos (I was impatient to see how it would turn out!), but I’ve put together some diagrams to illustrate the next few steps. The diagram for this step is shown below, with the warped square in dark blue and the rick racks in light blue numbered in the order they are added.

The third rick rack needs 2 warped squares to connect it to the first two, as shown in the diagram below (the existing pieces have been grayed out so you can see where the two new squares are added). This third rick rack is joined to the other two in exactly the same way as the last two were joined together.

It’s easiest if you attach both warped squares to the existing rick racks before joining them both to the new one. 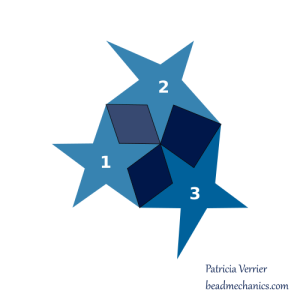 The next two rick racks are joined in the same way, with two warped squares each:

Piece 6 needs three warped squares to join it to the beadwork as shown below:

As for the previous pieces, it’s easiest to attach the warped squares to the existing beadwork before zipping them to the new rick rack.

We have the top half of a dodecahedron completed. The next pieces are added in to make the bottom half in a similar way.

The 7th rick rack needs 2 warped squares to join it to the beadwork, as shown in the diagram:

The rick rack looks a bit odd in the diagram as the work is very curved at this point and the only way I can draw it is by stretching it out flat! The squares and rick racks are all exactly the same, and as you add more pieces the beadwork will close in on itself from this point onwards.

Join piece 7 as shown using 2 warped squares. The photo below shows how the beadwork will look when the warped squares have been attached to the existing rick racks (their working threads are still there, just hidden behind the beadwork). Piece 7 will then be joined to them exactly as before.

The next rick rack gets added next to the last one, and needs three warped squares to join it to the beadwork, as shown in the diagram. Remember, the diagram is flat, but the beadwork will be curving back on itself at this point!

The 9th and 10th rick racks are added in the same way as well, using three warped squares each:

The 11th rick rack needs four warped squares to join it to the beadwork, like this:

If you turn the beadwork over you should have an almost complete dodecahedron with a gap at the top where the last piece goes. It will need 5 warped squares to attach it, as shown in the diagram: 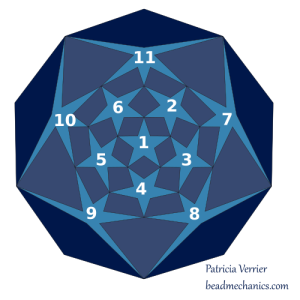 My advice for this last rick rack is to zip all five warped squares to the last rick rack very loosely, and once that’s done go around and pull the thread tight on each of these joins in turn. This makes it a bit easier as it gives a bit of extra room for manoeuvre with the beading needle. Once that’s done, weave all the threads in as before, and it’s all finished!

These instructions are for personal use only. Please contact me if you require more information.