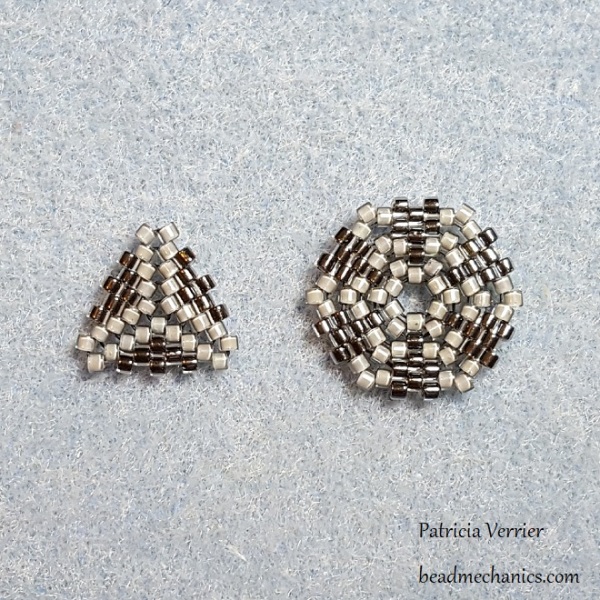 Diane Fitzgerald shows how to make all the flat polygons up to a hexagon in her book Shaped Beadwork. But what is the increase pattern for an octagon? 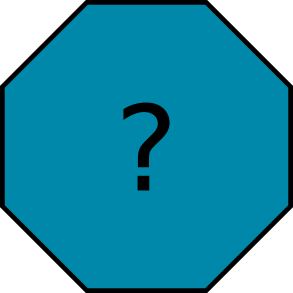 To answer the question I decided to make a mathematical model of the beadwork! (It’s actually just some simple geometry – so please don’t run away at this point – there is beadwork here too!)

Lets start by thinking about what a peyote polygon looks like. The easiest one to think of is a triangle:

We can split the triangle up into 3 segments or “cells” – the parts in-between the three herringbone (or 2-2-2) increases. These are themselves isosceles triangles:

You can see that each of the “cells” grows by 2 beads width each row – counting the total width of the row, rather than just the number of beads you would use to actually bead the row.

If you think about any regular polygon, you can see that it can be split up into these triangular “cells” too:

The angle at the corner of each of the triangular cells (the one at the centre of each polygon) will be equal to 360 degrees divided by the number of sides – this will be useful later on!

Since any polygon can be built out of these cells this is a good point to start with the mathematical model. Here is a diagram of a cell – to make the drawing easier I’ve used the increase pattern for a triangle, but I’ll extend it to other shapes in a minute:

The width (= length) and height (= diameter) of the beads will be important. I am going to call them w and h. For delicas we can look them up on Miyuki’s website, which states that the width of size 11 delicas is 1.3 mm and the height is 1.6 mm.

I want to know how many extra beads are needed each row to make the cell the right shape to make an octagon. Lets start in an ideal world where we can add the exact same number of beads every row, even if it’s a fraction of a bead (in reality to actually bead the shape you’d add beads one row then none the next to end up at the same number on average rather than per row). I’m going to call the extra number of beads needed “x“.

We know the width w of the beads, so if any given row is width R then the row above it will be width R plus the number of extra beads x times w:

As this is peyote the height difference between these two rows will be half the height of the beads, h/2:

What we want to know is what is x to keep the cell the right shape. To answer this we just need some trigonometry (see it is useful!). The row height and width differences worked out above are the height and width of the two orange triangles shown in the diagram below:

Since the cell is symmetric these two triangles are identical: both are height h/2 and together they must be width xw, so each one is half that, or xw/2. We also know that the angle at the inner point of the triangle will be 360 degrees divided by the number of sides of the polygon. For now lets say that there are n sides (for the octagon n will be 8). This gives us the angle at the bottom of the cell, which can be used to work out the angle of the orange triangle too (using symmetry and similar triangles – something else you probably thought would never be useful!):

That gives a right-angle triangle with an angle and two sides, and all that’s needed is some trigonometry to determine that the number of extra beads needed per row for a polygon with n sides is:

Simple (honest!) – but does this simple calculation actually work in practice?

If we use the width and height of size 11 delicas then for a triangle (n = 3) the formula above says that you need 2.1 extra beads per row – almost spot on for the triangle increase of 2 beads per row! And for a hexagon (n = 6) it says you need 0.7 beads extra per row. If you look at a hexagon you can see that overall the 2-1-0 increase adds 2 beads width every three rows – so on average the increases is 2/3 = 0.67 beads per row – which is again almost identical to the formula. So it seems to work!

Now the interesting part: what is the number of beads needed for an octagon with n = 8? If you put the numbers in to the formula it gives about 0.5 beads extra needed per row… which unfortunately is going to be a bit difficult.

It’s only really possible to increase at in increments of 2 (or more) beads per row, as 1 or 0 is just a normal peyote stitch (or possibly a decrease). So to get on average 0.5 beads per row you’d need to increase 2 beads every 4 rows, which wouldn’t really work – not only would it be a bit to far between increases to approximate the gradual increase, but if you add 2 in a row, then you must add 1 the next, then 0, then 1, which leaves you trying to do an increase on top of a bead not a space, which isn’t going to work well. So, instead of sitting around waiting for the invention of half-delicas I decided to try a different approach: an asymmetric alternating increase pattern:

Here’s a photo of my first attempt at a flat octagon using this method:

I used blue and red for the alternating increases and green for the normal peyote stitches in-between. I started with 4 beads, then added another 4 total in next round (all in red), then increased by 2 in each space in the third round (this is where the first blue beads appear). The next round the blue “increases” are just 1 bead, and in-between them the red increases are 2 beads. After that I continue on alternating the 2-1-0 increase pattern until row 10, where I skip a 2 increase in the red beads, and just use 1 bead instead (you can see where there are two single red beads stacked on top of each other. Then I continued on with in-step 2-1-0 increases for a few rows until I ran out of thread.

The centre has gone a bit wonky – mostly this was a result of poor tension as for some reason I could only find size 00 thread, which was just too thin to maintain the tension in the centre! It’s fairly symmetrical though, despite the alternating increases, and also – more importantly – flat!

Having located a more appropriate thickness of thread I made a second attempt with a few more rows:

This uses the same increase pattern, but now the increases are all in silver and the normal peyote between them in alternating blue and green until row 10, which is in orange (and is where one set of 2 increases is skipped). All the rows beyond this (where the increases are in-step) are in red. The benefit of the skipped increase at row 10 (apart from keeping the shape flat!) is that you end up with identical edges, which is helpful both for the overall symmetry of the shape and if the octagon is going to be stitched to other shapes.